Liliane Mathilde Savard, called Anna by friends and family, is 27 years old when  the Waverly Place series opens in 1883. She is the first daughter and second child of Henry and Curiosity(Birdie) Savard, both physicians. Anna is orphaned at almost four. Her Aunt Quinlan takes her into her home on Waverly Place in Manhattan to be raised.

The Civil War takes a terrible toll on the Savard, Bonner and Quinlan families. Among the fallen are Anna’s brother and her Uncle Harrison Quinlan. The war has also orphaned Sophie Savard a second cousin from New Orleans. Sophie comes to live with Aunt Quinlan, and a strong bond is formed between Anna, Sophie, and Anna’s close friend, Cap.

The three children attend elementary school in a special class for the children of Cooper Union faculty. Anna and Sophie go on to study at the Rutger's Female College for Women on Fifth Avenue, and then enroll as students at the Woman's Medical College of the New York Infirmary They both come from many generations of doctors and healers, and medicine is the only future they can envision for themselves. Cap studies as Columbia College, and then enters Yale Law School.

At age 24 Anna is fully qualified as a physician, but she studies another year to qualify as a surgeon. By the summer of 1883 she is well established on the staff of the New Amsterdam Charity Hospital

Anna’s costume for the Vanderbilt Costume Ball was inspired by the portrait below. 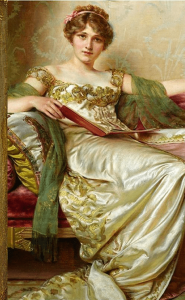