The [Third Judicial] courthouse was completed in 1877, and in 1885 a panel of American architects sponsored by American Architect and Building News voted it the fifth most beautiful building in America.

In the triangular block that housed the police and district courts was also a market that played a central role in the daily life of the neighborhood.

Thomas De Voe, a butcher with a strong interest in documenting the history not only of his trade, but of public markets in general, wrote a detailed account of the Jefferson Market, which even in its earliest incarnations (ca 1835) was very large, housing sixteen butcher stands. By the 1860s there were, according to De Voe, butchers, poulterers, fruit and vegetable dealers, fishermen, as well as vendors who sold household goods and sundries. He includes anecdotes about specific individuals and events. An example follows (1865: 572-573):

The Blind Man of Jefferson Market

On the Sixth Avenue side, under the eaves of the country market,
may be daily found the “Blind Man of Jefferson Market,” Henry
McNerney, once an assistant clerk in the Navy Department at Washington,  under the Honorable James K. Paulding. Every morning, except the Sabbath, may be seen the little prattling daughter leading her blind father, threading her way through the carts, wagons, baskets, &c., to his little inclosed stall, where she leaves him with a “good-morning,” and back home again she returns for her school ; in the evening the same duties are regularly performed by her to take him home again, and on Saturday night late, between ten and eleven, his wife or son performs that duty. As soon as he arrives at the market he opens his small store of goods, by taking down the shutters, dusts off his exposed wares, and tastefully, as well as feelingly, puts all in order ready for his scanty sales.

Behind and before him are arranged his crockery, candies, cake, and cord; shoe-strings, sewing-thread, suspenders, sugar-plums, and many other little articles, make up his stock in trade, where all can be reached, cases opened, any article selected, and change given; and, I believe, but few have been heartless enough to steal or take advantage of him. His trade, however, is quite slow, but patiently he waits for the sometimes few shillings, and then again an exceedingly good business day will bring him in a few dollars : he says, ” I did pretty well when I first came here ; then I took in three, four, and five dollars — now I seldom take in as many shillings.” […] He has been located here since 1852, by the kindness and intercession of some of the authorities who gave him a stand here, without rent; but I am sorry to record that at times, when any amount of sales were made by him, one of the Clerks demanded fees ; however, within the last five years business has been so dull with him, that no fees have been collected from him.

The De Voe volume makes it clear that infrastructure of the public market was very large, complex, and in the author’s experience, dishonest and open to bribery.

In the nineteenth century arrests made in [[the Tenderloin]] district – notorious for gambling, boxing matches and prostitution — were made by police officers of the …. but the accused were arraigned and often tried at the Jefferson District Courthouse, as in a particularly sensational case involving Mae West.

From “The Jefferson Market Library’s Fascinating History” by Clive I. Morrick, December 2014. The WestView News.

Mae West spent the night of February 9-10, 1927, in the Jefferson Market prison. It happened this way. She was a Brooklyn born writer, producer, and star of risqué plays. On February 9, with Mayor Walker out of town, and prodded by the Society for the Prevention of Vice, the police raided her play “Sex” at Daley’s Theater on 63rd Street and arrested the entire 22-strong company. The play had opened without protest on April 26, 1926.

The 22 were taken first to the local station house and then to the Men’s Night Court on East 57th Street. Mae West, whose age was recorded as 26 (she was 33), and co-star Barry O’Neil, were docket numbers 1795 and 1796. Magistrate John V. Flood set Mae’s bail at $1,000. Unable to raise that in the middle of the night she went to jail for a few hours. Six days later, Flood remanded the principals in the company to the Court of Special Sessions to be tried on three public morals charges.

But Mae’s lawyers obtained a jury trial in the Court of General Sessions on Centre Street on the ground that this was a matter of public importance. After a grand jury indictment her trial began before Justice George L. Donnellan and a jury on March 28, 1927. The jury’s guilty verdict followed on April 5, and the sentence – 10 days in the Welfare Island workhouse and a $500 fine – on April 19. She served eight days.

The next year there was a repeat performance by the authorities over her play “The Pleasure Man.” Her trial began on March 17, 1930, and ended in a hung jury. There was no retrial. In 1932, she left for Hollywood and became the Mae West of (the apocryphal) “Is that a gun in your pocket or are you just glad to see me?” fame. 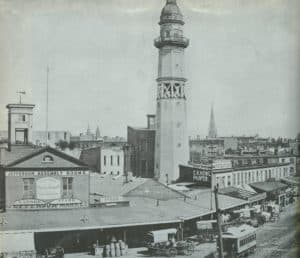 What is today the Jefferson Market Library on Greenwich Ave. between 6th Avenue and West 10th Street was formerly the Jefferson Market. The block originally housed a dingy police court in the Assembly Rooms over a saloon, a volunteer firehouse, a jail, and an octagonal wooden fire lookout tower constructed in 1833.

The wood tower and market structures were razed in 1873 to make way for a new civic complex and courthouse, which opened in 1877.