This novel, set in 1858 in New Mexico Territory, serves as a bridge between the Wilderness series of novels and the first two novels of the Waverly Place series.

Callie Ballentyne is a young girl when her life is upended and she must leave the only home she knows. With her mother – recently widowed – and her younger brother Nathan she moves to Manhattan. Lily Ballentyne remarries, a well-to-do old family friend, and they settle down in a large house on Waverly Place. Callie never learns to like the city, but she and her brother respect their step-father (if not their step-sister Margaret), and school is a welcome distraction.

At fifteen Callie enters into a midwifery apprenticeship with her cousin Amelie Savard. She attends nursing school as well, because her patients and their children need more than one kind of care.

When she has been employed by the New Amsterdam Charity Hospital for six years, the director brings her a letter from his brother-in-law, Dr. Samuel Markham of Santa Fe in New Mexico territory. Dr. Markham is looking for a nurse and midwife to join his practice. To the person who can meet his rather unusual requirements he offers a modest salary and room and board with his family. The requirements are unusual but they appeal to Callie.

Dr. Markham requires someone who is not put off by living far from civilization, with few amenities. The landscape is harsh; the person who joins his practice will have to be comfortable traveling on horseback to see patients. The patients are poor, and most of them have no English. A willingness to learn Spanish is a non-negotiable requirement. The Navajo, Apache and Kiowa and other tribes sometimes attack wagon trains and settlements, so this midwife must be courageous, committed and able to handle weapons. At the same time, she will be living side by side with Indians of many tribes — primarily the Puebloan –  and she must be ready to learn about their cultures without assumptions or prejudice. 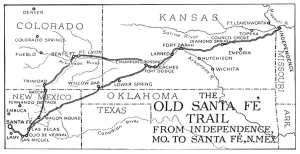 Opening: 1857
With Nathan as a traveling companion, Callie sets out for Santa Fe. The first part of the journey is by train. The rail system reaches only as far as St. Louis, and from there they board a packet on the Missouri River. Once they reach the Kansas border they must join a wagon train.

Callie will find Santa Fe to be full of unexpected contrasts. It is a town dominated by two forces: first, the Army, which is there to protect the citizens from Indian raids and to keep the territory under American control.[1]It is less than ten years since Mexico surrendered the lands first colonized by the Spanish Empire hundreds of years before. At this point in time, New Mexico territory includes what is now New … Continue reading

In the course of the journey west and finding a place for herself in Santa Fe, Callie finds she can no longer evade the repercussions of the events which made her mother leave Paradise for Manhattan. While she struggles with unresolved loss, she develops a relationship with Eli Ibarra, half Basque, half Pueblo Indian. Callie has to learn what it means to be Indian in the west.

In Santa Fe Callie deals with racial, religious and ethnic conflicts, with slavery and with women’s mental and physical health, and with the political chaos of a nation on the brink of Civil War.