Manhattanites were proud of their churches and synagogues, and there were a lot of them. Every Christian denomination of the time, and more than one kind of Judaism, was represented. There were also scores of missions and charitable organizations attached to the various denominations. I haven’t been able to find evidence of any other religious groups, but they may well have been there. Certainly the large Chinese population may have had some organized approach to religious services.

The relative importance of any particular denomination or church or temple is a matter of opinion. The size of the congregation and their economic power, the age of the institution and its location, all of these factors and others would have to be taken into account to come to any conclusions. This is not something that interests me particularly as an author, but I can provide information on those institutions which are relevant to The Gilded Hour either in the plot or setting.

The first Trinity Church building, a modest rectangular structure with a gambrel roof and small porch, was constructed in 1698. According to historical records,Captain William Kidd lent the runner and tackle from his ship for hoisting the stones.

The second Trinity Church was damaged in a snow storm and torn down.  The third and current Trinity Church began construction in 1839 and was finished in 1846. In 1883 Trinity’s 281-foot spire  was the highest point in the city. It retained this record until  1890 and the construction of the New York World Building.

was built over a long period of time and consecrated in 1879.  The cathedral, which was designed as the seat of the archbishop,  had the same name as the  earliest Roman Catholic Church, which stayed where it was in one of the poorest neighborhoods.  It took years to complete all the structures associated with the Cathedral — the seat of the archbishop wasn’t completed until 1882, for example.  In 1883 the cathedral sat across from the Vanderbilt mansions, which were all torn down over time. It now faces Rockefeller Center and the Atlas Statue. 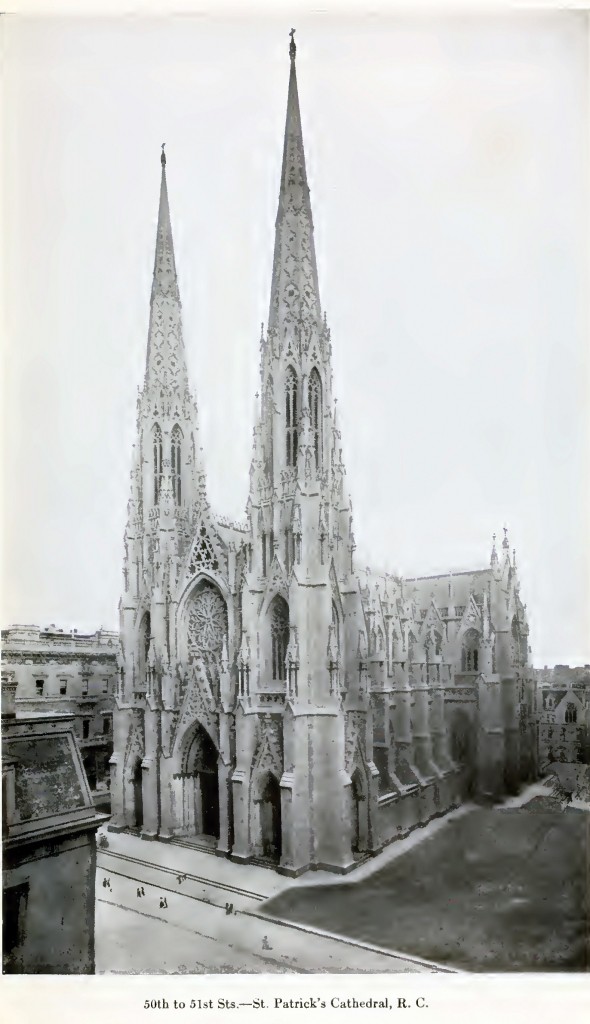 Old St. Patrick’s Church on Mott Street was also surrounded by related institutions, some of which were a home for unwed mothers, a lying in hospital, and orphan asylums.

Was built specifically to meet the needs of Italian immigrants. It stood at 149 Sullivan Street until funds could be raised for a larger church to serve the growing immigrant population.  Construction began on the new church in 1886, after the events of The Gilded Hour.

In the 19th century Grace Episcopal was  one of the largest and best funded churches in the city. It was consecrated in 1846,

Grace is located at Broadway and Tenth Street.

The Central Synagogue (Congregation Ahavath Chesed) is located at 652 Lexington Avenue on the corner of E 55th Street,Manhattan, New York City, New York. Built in 1872 in the Moorish Revival style as a copy of Budapest’s Dohány Street Synagogue,[5]it pays homage to the Jewish existence in Moorish Spain.[1] It has been in continuous use by a congregation longer than any other in the city.

From museon.com this image and article. 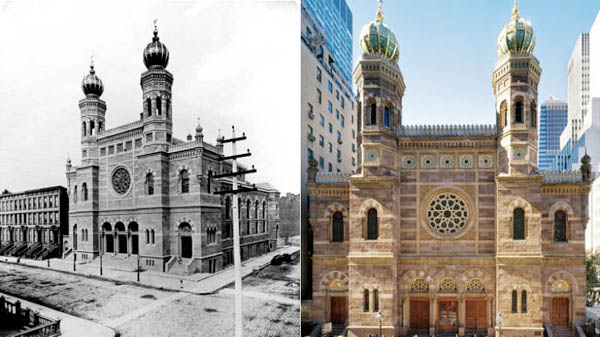 [As it was known in the 1880s,]  is located at 172 Norfolk Street between Stanton Street and East Houston Street in the Lower East Side of Manhattan. The style is Gothic Revival. The synagogue was built in 1849 for Congregation Ansche Chesed (People of Kindness).