From Painting the Town: Cityscapes of New York Paintings from the Museum of the City of New York. 2000.

Union Place, first called the Forks to describe the junction of the Bowery, Broadway, and University Place at 14th Street, originated as a burial ground for indigent people. As the city continued to grow, the cemetery was transformed into a park, making Union Square a desirable location for those wealthy New Yorkers who constituted the vanguard of the northward migration.

Once the city expanded as far north as Union Square the neighborhood became a fashionable residential district[1. Jenkins, Stephen. 1911. The Greatest Street in the World – The Story of Broadway, Old and New. New York City: Knickerbocker Press.] and went on to evolve into a commercial center with theaters, high-end shopping and concert halls.

Union Square. — We enter it at its quietest (northeast) corner, where E. 17th St. crosses Fourth av. The Everett House is on our right, and the Clarendon Hotel on the left. A broad paved space called The Plaza, borders this northern side, and may be illumined at night by the picturesque row of lamps along the curbing. Here military parades and out-door meetings are often held, the speakers finding a rostrum on the balcony of the Sanitary Cottage. Overlooking this plaza are the windows of Tlie Century and St. Nicholas editorial rooms. The Square itself is an oval park of three acres or so, shaded by large trees, and orna- mented by a handsome fountain and statues. On the Fourth av. side are a row of hotels, restaurants and shops, among which the Singer Sewing Machine office is tallest. South of the Square runs the busy line of 14th st. — where the Union Square Theatre, the Morton House and several fine shops are conspicuous. Here, in the midst of a paved space, stands an equestrian statue of George Washington. It is of heroic size, was modelled by Mr. H. K. Browne, and holds an outstretched hand as if in remonstrance at the wrangles of the crowd of news- boys who assemble here every afternoon to buy newspapers from the delivery carts of the News, Sun, World, Telegram and other evening newspapers.  Straight against the southern end of the square breaks the whole traffic-current of Broadway, to swerve to the west of it, and sweep in an augmented tide along its further side, where 14th st. adds its quota. Here, where the crowd is densest, has been placed that bronze statue of Abraham Lincoln, seated in the chair of state with the emancipation proclamation in his hand, which was erected by popular subscription soon after Lincoln’s assassination. The sculptor is H. K. Browne, who is thought to have succeeded better than he did with the equestrian Washing ton…t the other corner of the Square. Between these two bronzes of heroic size, and facing down Broadway, stands the life-sized figure of Lafayette, which was designed by Bartholdi, the sculptor of the Liberty statue in the harbor, and erected in 1876 at the cost of the French residents of the city.

In the decades after the war Union Square got very busy. In the photo above the trolley lines had already been installed, something that happened in the early 1890s.

By 1882 the southern perimeter of Union Square was the center of the theater district, while the rest of it was dedicated to service industries and merchandising. Points of interest: Steinway Hall, Tiffany’s Fine Jewelry, Everett House (one of the city’s most fashionable hotels for the second half of the nineteenth century), F.A.O. Schwarz, Brentano’s Books and Sarony,[1. A  full, detailed biography of the famous photographer can be found at ClassyArts.com.] whose studio was at 37 Union Square. When Oscar Wilde came to New York on a lecture tour in 1882, it was Sarony who photographed him.

From the Met Museum:

Napoleon Sarony, an acknowledged master of celebrity photographs, succeeded Mathew Brady as the best-known portrait photographer in New York. Opening his first studio on Broadway in 1866 and moving to more elaborate premises on Union Square in 1871, Sarony took full advantage of the growing fascination with the theater that swept America in the aftermath of the Civil War. His inexpensive cartes de visite and more upscale cabinet cards, produced in the thousands, satisfied both the need of actors for publicity and the public’s mania for collecting their images. 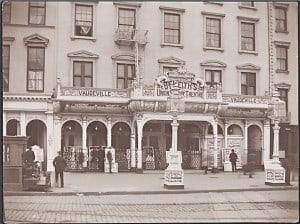 From The New York Times:

[In 1869] … the new $500,000 Tiffany building, at 15 Union Square West, was designed by John Kellum. His cast-iron facade, chosen for its supposed fire resistance, was more elaborate than the typical loft building, many of which Mr. Kellum had also designed, but not remarkably different from them.
The Times called the new building a “palace of jewels,” with black-walnut counters and ebony cases holding watches, fans, opera glasses and other articles in wood, leather, silver, cloisonné, enamel, bronze and rosewood. The Times observed that one ornamental statue, ” ‘Zingerilla,’ by the Spanish sculptor Klessinger, appears almost ready to speak to her admirers.”
An unidentified reviewer for The Real Estate Record & Guide scrupulously remarked that the completed building was “a fine specimen of workmanship” but painting the cast iron to resemble stone deceived no one and contributed to the building’s “utter poverty of design.”…
At the building’s opening in 1870, The Times described security so tight that “a 50-cent pin can’t enter or leave the establishment without its history being fully known and recorded.”
But such security was fleeting. The next year The Times reported that a man named Francis Brode got in through an upstairs window one night, collected a large amount of booty and was arrested only because he inadvertently alerted a watchman. Similarly, in 1873, The Times noted that a salesman, Henry E. Murray, had been sentenced to prison for stealing at least $10,000 worth of goods. 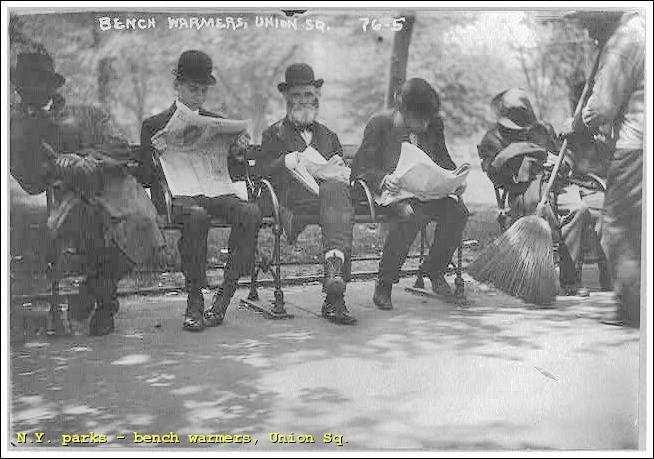 This photo of old men reading on the park benches was taken in Union Square, but it might have been shot in any park in the city. At any time.

The theater district on the southern end of Union Square was dubbed  The Rialto after the commercial district in Venice. The New York Times seems to have been the first paper to use the term.

Star), the Union Square Theater, Tony Pastor’s, and half a dozen other smaller venues, southern Union Square was populated by costumers, music dealers and the other industries that supplied the stage. Where people went to the theater they also wanted to eat and drink.

In the nineteenth century, an evening at the theatre was likely to be a culinary as well as an artistic experience. Theatres frequently maintained cafes where liquor, coffee, and cigars could be consumed, and some even operated dining facilities in their buildings. Restaurants in the vicinity of the city’s theatres likewise catered to a clientele composed of managers, performers, and theatre goers. The more wealthy could dine sumptuously before the show at Delmonico’s on Fifth Avenue, Taylor’s Saloon at 365 Broadway, Louffre’s on Pearl Street, the Maison Doree on Union Square, or in the dining rooms of the Union Square Hotel or the Morton House [one wall can be seen to the left of the Star Theater in the image above]. Less wealthy patrons could choose from a variety of oyster and chop houses; German weinstuben, which offered reasonably priced German cuisine and a wide selection of beers and wines; or Italian restaurants, where two dinners with wine cost less than a dollar.

With the exception of Lüchow’s on East Fourteenth Street, few establishments on Union Square achieved the fame of Rector’s, Shanley’s, Bustanoby’s, or Sardi’s, their twentieth-century counterparts; nevertheless, they were equally reliant upon the theatre trade, actively cultivated the patronage of the era’s most popular performers, and acquired reputations as theatrical restaurants.[1. Frick, John. “A Changing Theatre: New York and Beyond.” In The Cambridge History of American Theatre, edited by Don B. Wilmeth and Christopher Bigsby, 196–232. Cambridge: Cambridge University Press, 1999.]

The evolution of the southern half of Union Square can be traced through early photographs. Many of the spots mentioned here are relevant to the novel.