Anthony Comstock was a self-proclaimed ‘Weeder in the Garden of the Lord’ who sought to impose his understanding of law and sin on the general public.  He was employed by the government as a United States Postal Inspector. He was instrumental in the development of anti-vice laws that criminalized any use of the U.S.

A Private View at the Royal Academy, 1881

This painting is the work of  William Powell Frith, and was exhibited at the Royal Academy of Arts in London in 1883. It depicts a group of distinguished Victorians visiting the Royal Academy Summer Exhibition in 1881, just after the death of the Prime Minister Benjamin Disraeli.… Read more.

A social theory discussed in the novel in connection with the purpose of the [[orphan trains]]. Text from Wikipedia, citations and some links intact.

Malthusianism is a school of ideas derived from the political/economic thought of the Reverend Thomas Robert Malthus, as laid out in his 1798 writings, An Essay on the Principle of Population, which describes how unchecked population growth is exponential while the growth of the food supply was expected to be arithmetical.… Read more. 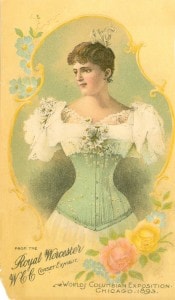 From the Met Museum:

The torso atop the bustle also reflected increasing technological innovation in the construction of foundation garments. With the increased reliance on steel boning and ever more complex pieced construction, the corset became capable of delivering an armored underpinning to conform the body to an hourglass silhouette.… Read more.

Victorian dress reform was an objective of the rational dress movement of the middle and late Victorian era, comprising various reformers who proposed, designed, and wore clothing considered more practical and comfortable than the fashions of the time.

Dress reformists were largely middle class women involved in the first wave of feminism in the United States and in Britain, from the 1850s through the 1890s.… Read more.

When people think about the first female doctors in the U.S., generally the names that come to mind are Elizabeth  and Emily Blackwell. These two sisters together with Marie Zakrzewska confronted — and overcame — the barriers that women who wanted an education and a profession faced in the mid-19th century.… Read more.